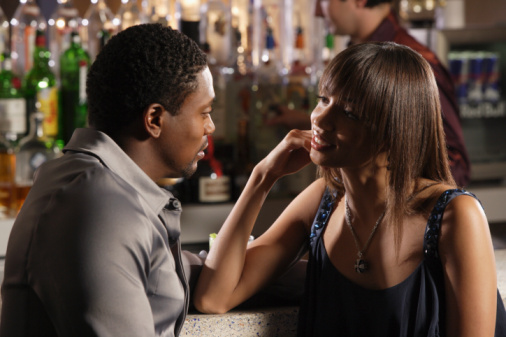 Remember, most of the time women decide in the first few minutes whether you are going to be a potential lover or a lowly friend. The best way to become a lover is to stay out of the “friend” category in the first place, rather than trying to get out of it later, when it’s too late. Today’s audiotape lesson about the basic flirting moves is about exactly that.

If you don’t do the flirting moves, you are operating as a level 2 or level 3 seducer, not a level 4. This is where the rubber starts to hit the road.

How they fit together

The “hi” program will tend to get you into interactions with women. Some of those interactions will leave you feeling great (so you must celebrate your victories) and some will leave you feeling rejected (so you practice the three-step rejection process). Then some will lead to longer interactions. These flirting moves are the natural next step while you are interacting with her. We’ll give you much more material on talking with women later in the program…but you can use these moves even if you are just talking about the weather!

The flirting moves that put get you out of the “lowly friend” category and into the “potential lover” category:

Look into her eyes “too long.”
This is simply holding eye contact a little bit longer than you normally would. While you are conversing with her, you want to be sure to have eye contact at least some of the time. At least once it’s a good idea to hold the eye contact a little “too long,” just a fraction too long, so there’s a brief, more intimate moment between you.

Make decisions easily.
It’s important to make sure that you make decisions easily. Remember your outcome: romantic feelings, and moving the seduction along. This means that making a decision quickly is more important than choosing the perfect type of coffee, or taking the time to really think about whether you want a cherry danish or a plain one. By making decisions quickly, you show her that you are a decisive man who she won’t have to take care of.

Check out her body.
Checking out her body must be done properly. The goal is for your new friend to feel complimented that you noticed her body, not objectified like some piece of meat. You do this by making eye contact, then quickly, in less than a second, passing your eyes down and then up over her body, then back to looking in the eyes. It should happen quickly, and you should be unashamed of taking a glance. Just don’t do it too often–two times during a coffee date, for instance, is plenty.

Keep your body powerful.
Women want to be with men who are engaged in their lives. You’ll appear even more engaged if you sit, stand and move like you are both fascinated and fascinating. As a bonus, moving as if you are totally engaged with and turned on by life will perk you up and give you more energy for the interaction.

You want to make it clear that you are a man who is noticing her as a woman, rather than an amorphous blob of undefined protoplasm who might as well be another woman talking to her. A man who is committed to being seen as a potential lover gives compliments that show that he notices her as a woman. Rather than saying “You have a nice briefcase” he’ll say something like “You have beautiful eyes,” or “Your smile is so beautiful, it lights up the room.”

At first it may be uncomfortable for you to compliment her, that is okay–keep going, keep taking the risk, and up the passion in your compliments. Yes, you are risking rejection, but that’s good! Remember the rejection process, and remember to celebrate your victories!

Whisper to her/lean into her space. Whispering to her doesn’t mean you have to get all the way up to her ear…it may be too early in your interaction with her to get that close. But you can lean into her space, and lower the volume of your voice, to share something with her