No Woman to Date 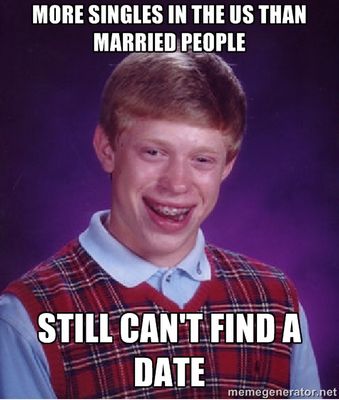 I live in a big city (Los Angeles), but there don’t seem to be any women I can date here. What can I do ?

This is most likely a problem of “editing out” women you could possibly interact with, before you even think about them consciously. If you currently edit out 99% of all the women you are attracted to right away, then of course it will seem like there are no women you could be attracted to–and doing such editing is much more common than you might think. There are two main ways men edit women out, before they even think about dating them. First (and most popular), is by telling themselves, “She would never like me.” They see an attractive woman, tell themselves that “she would never like me,” and edit her out of the pool of possible women they could date.

We had one student who did this constantly, and who learned a valuable lesson about it. He had seen a girl at a local dance club on a number of occasions. She was the kind of girl he liked–short, trim, with dark hair and horn-rimmed glasses. She was also about 20, in his estimation–and he was 38. “Naturally” he assumed that she would never be interested in a guy like him. He gave himself reasons why that must be true: He was too old for her, he wasn’t good looking enough, he was too fat, and so on. He then continued to wonder why there were no women out there for him to date.

As part of working with us, he posted a personals ad on the internet, looking for women in his area. He didn’t get many answers, but there was one women who caught his interest. She wrote, “I’m 20, so if that’s an issue for you, you should let me know. Also, I’m bisexual, so if that’s an issue, you should know upfront about it.” (To put it mildly, that was NOT an issue with him.) They emailed back and forth, exchanged pictures, and–you guessed it–it was the girl from the club. They really clicked on the phone, and in person, and in short order became lovers, and dated off and on for over a year. She once told him, “Some of the things I like like about you are that you’re older, mature, and you don’t live with your mother!” He later told us, “I can’t help but wonder how many women like that are out there for me, but who I reject instantly, before they even reach my conscious mind, just like I did with her.”

The second way men edit out women before they know them is to assume that the woman, physically attractive as she might be, would never be smart enough, interesting enough, passionate enough, or whatever enough, for him. If these guys were to articulate this feeling, they would say something like, “Hot, stylish women are shallow, stupid, and not interested in anything except how they look. I just wouldn’t get along with a woman like that.” Before you instantly decide that YOU aren’t like that–you’d be happy to sleep with a vapid fashion model, tonight–be aware that many men think that they want that, but when it comes down to it, they really don’t. They like the fantasy of being with a shallow, hot woman, but in reality they aren’t into it. They really, truly want to be sexual with women they are attracted to, and whom they actually like.

Whether this describes you or not, a lot of men edit out women thinking that, hot though the women may be, they don’t seem like someone the guy would like. Another man we know did this with a woman he met though a social group he was part of. “She was cute, but I just assumed I wouldn’t like her, because she didn’t seem like the kind of woman I normally went for–she seemed really girly, and I assumed she’d be shallow and dumb.” But that didn’t turn out to be true. “As I spent more time with her, by accident, as we were hanging out with the same people–I saw that she was nothing like I originally though she’d be. I really liked her and she really turned me on.” They started dating and got into a relationship. It’s worth asking, how many women like that were out there for him? How many such women got “edited out” of his mental list of women he could date, because he assumed instantaneously that he wouldn’t like them?

This is not to say that if you stop editing out women, all women will automatically like you, or that you will automatically like all the women you are physically attracted to. But it will help end the problem we hear from men over and over–even from men who live in cities full of hot, available women, like New York City or Los Angeles–that there are no women they can date. If you currently edit out 99% of the women you could possibly approach, before you even think about them (and many men do), and you reduce that to only editing out 94% of possible women, you have increased your pool of possible women by 500%! That’s good news–it’s a small change that could make a big difference.

If you understand that you have been editing out far more women than you need to, you will be able to get more women into your dating system, and get a lot more of what you want from them.