Dealing With Competition From Other Men 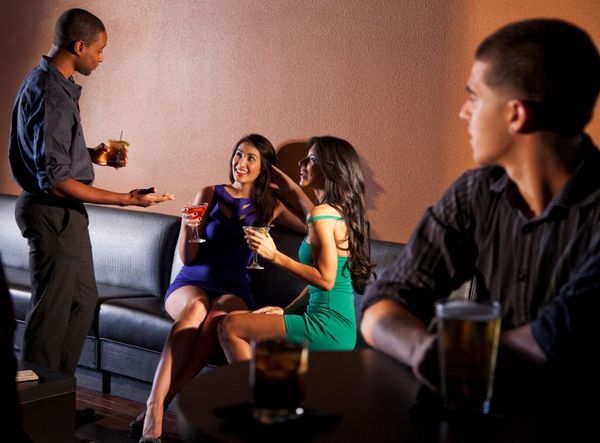 I am recently divorced and found myself having a hard time making connections with women after being in a 9-year relationship. Before I met my ex-wife I considered myself as a “player” and had little trouble finding girls to go out with. After being out of the scene for so long, I had lots of trouble trying to get back in to the swing of things. Your ebook and emails have instantly put me back in the game and I am now getting dates with very attractive women!

Its been amazing!! Thank You!

Now for the question. All these attractive women have brought something into my dates that I am not used to, Men (Cock Blockers)! Currently, I am dating this “bomb-shell” occasionally and when we go out on a date, men will hit on her as soon as they get a chance.

If I turn my back for second, some guy will try to make eye contact or say something to her. I don’t blame the guys because she is very hot, but how do I deal with this in a way that shows I am 100% confident?

Typically, I just laugh and continue to have a goodtime by ignoring the lame ass attempts to pick up on my date, but there has to be a way that I can turn this around to make me look more confident in her eyes.

Well then… welcome back!

I’ve noticed that the period after breaking up with a long-term girlfriend or spouse is often a difficult one.

“Will I ever meet another woman?”

I can remember breaking up with long-term girlfriends in years past, and feeling an empty, fearful, LONELY combination of emotions in my gut that was HORRIBLE.

That ALONE is enough to cause a lot of problems.

Add to that not knowing where to start, what to do, or how to “get your game back” if you had it in the past and you usually get a bad situation.

I’ve learned that knowing how to go out anytime and meet women has a couple of MAJOR benefits when it comes to this area:

In short, what I’m trying to say is that I think understanding this area called “How to attract women” is a KEY to having a good relationship.

When you have that inner confidence and KNOWING, it makes you more attractive, period.

First I want to talk about what I believe is at the ROOT of the problem:

When you are insecure, you’re always wondering if some other guy is going to come along and steal your girl.

This often shows up as a combination of feelings that make you worry about losing your girl, and at the same time worrying about not being able to find another one if you DO lose this one.

This is a BAD, BAD thing, because it then CLOUDS YOUR THINKING, and creates an illusion that the woman you’re with is BETTER than she is, and that you’re WORSE than you are.

We’re talking about some deep issues here, but this is the stuff that triggers the ULTIMATE WUSS types of behaviors.

Then, as if things weren’t bad enough, you go out with your girl, and other guys start hitting on her right in front of you.

This triggers MORE insecurity, and then the REAL problem… JEALOUSY.

Jealousy is an incredibly powerful emotion.

It often leads people to KILL people they love.

One scientist wrote an entire book about Jealousy, and basically claimed that it was the most powerful and important emotion ever! (The book is called “The Dangerous Passion” by Buss)

When you’re out with your girl, you turn around to order a drink, and when you turn BACK around there’s some guy talking to her with that “I’d love to take you home and do things that the lord forbids”, it can trigger a few emotions…

This is very natural. Animals have this same response in similar situations. I personally believe that we come pre-wired with BOTH of these things:

-We come pre-wired to want women that other men already have (Don’t covet thy neighbor’s wife).

-We come pre-wired to feel jealousy if we suspect that our spouse is cheating, or if we think that someone is going to take them from us.

….Jealousy leads to anger, anger leads to INSECURE WUSSY BEHAVIOR… and insecure Wussy behavior leads to the DARK SIDE.”

Now, jealousy doesn’t always lead to insecure WUSSY behavior, sometimes it leads to insecure DUMB ASS behavior, like getting into a fight, or shooting someone.

Some men enjoy fights and violence.

And some women have no problem dating a man who likes to beat other men up (or beat her up).

I personally think that violence and hurting other people is the IGNORANT way to deal with things.

But I also know that there are a lot of guys out there that don’t share my views. To each his own.

The POINT I’m trying to make is that insecurity and jealousy make people do all kinds of stupid and thoughtless things.

These emotions take over your mind and body, and can trigger some of the most short-sighted behaviors you’ll ever experience.

These are complex emotions that have evolved over millions and millions of years… and they’re not going away anytime soon. In many cases, they literally take control of your mind and body.

Let’s say you’ve just broken up with your girlfriend or wife, and it took you a long time to finally get a date with an attractive woman. Maybe you were feeling insecure, and didn’t know if you could meet another woman, and let’s say that the breakup was hard on you as well.

Let’s say you’re out at a bar with your new date, and you excuse yourself to use the boy’s room… and when you get back, there are TWO big, handsome guys talking to your date, and she’s laughing hysterically at what they’re saying.

What would most guys do in this situation?

All kinds of fear, jealousy, insecurity, etc. would INSTANTLY take over, and there would be thoughts of her wanting to be with these guys, them taking her away, etc.

And what do most guys actually DO in one of these situations?

They walk over, act nervous, and try to take the girl away from the situation. And they make the mistake of making it OBVIOUS that they’re all freaked out, intimidated, jealous, and insecure.

This, of course, only makes the other guys feel more powerful, and makes the woman realize that she’s with an insecure WUSS.

It becomes a self-fulfilling prophesy, in most cases.

As a side note: I have met and know of guys who actually ENJOY picking up women who are out with other guys. It’s a game to them.

And they’ve found that it’s EASY, because most men are insecure, and most women don’t want to be with a WUSS…

So what’s the answer here?

What’s the best thing to do when a guy is making his move on your girl?

Well let’s start from a little BEFORE that.

The best thing you can do in one of these situations is what you do BEFORE it ever happens… and it’s a combination of things:

Some women enjoy making men compete over them, and you probably don’t want to be with one of these women.
They’re a pain. But if you think it’s just a typical situation and the girl is trying to figure out if you “really” like her (because you’ll get jealous if you do), then just turn around and start a conversation with a group of girls… and wait for her to come and find you.

The point I’m making is that you MUST get over that fear/insecurity/jealousy issue, and realize that there is nothing to be afraid of.

The only power that other guys will have with your date is the power that you GIVE them… so don’t give them any power by acting like a WUSS. Keep your power for yourself. The main reason that other guys try to hit on your girl is because they don’t have one themselves. Remember that.

…and if you’re reading this right now and thinking to yourself “You know, I need to learn this stuff about how to meet and attract women so I can get rid of that insecure and fearful feeling I have”, then YOU’RE RIGHT!

I think that every man should invest in himself, and learn this skill.

Unfortunately, most guys never take the time and invest in themselves… and they wind up going their whole lives WISHING that they could attract the kinds of women that they want.

I TOOK THE TIME TO LEARN.

And if you’d like to learn, then I recommend you learn the things that I learned FIRST.

It’s taken me a long time to figure all this stuff out, and it’s also taken a lot of time, effort, and energy on my part to put it all down on paper and on audio and video… so that any guy can learn from the things I’ve discovered.

I’d like to personally invite you to check out my materials. In a matter of hours you can learn things that it took me YEARS to figure out… all from the comfort and privacy of your own home.