How To Tell If Someone Is Lying 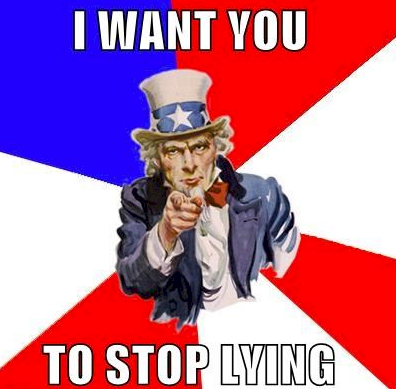 Being riddled with the question of “how to know someone is lying”, i decided to seek advice from experts in BeingAMan forum. Those guys were a great help.

There are a number of signs you want to look for when a woman is lying :

Of course, just one of these signals can’t be used as an indication of anything. You need at least 3 or more of them together or rapidly following one another.

The only way to really get good at this is to practice watching her. However, you need to know when she’s lying (you know the truth and she doesn’t know that you know it), and to see what “tells” she uses specifically. She might use others not included in this list.

Here are some feedback from cosmocogito  :

Also, she can look you STRAIGHT IN THE EYE when she lies as well. My best clue, is her VOICE TONE.

Overtime, you can figure out her voice tone when she lies. One chic i knew, her voice would very slightly “tighten up”. Some other chicks might go higher than usual, etc. Voice is a tough on for many people but because my voice is my bidniz, i can tell a lot about a person just from their voice tone.

That’s funny, because that is second nature to me, after all the voice training i have done. For a “normal” person, how the tone of their voice operates is INVOLUNTARY. You can’t consciously control it. It involves all of the tiny muscles in their throat, and the resonators in their head and chest, which are constricted, when the emotions/muscles get
constricted.

The ONLY way to manipulate your voice, is by using “method” acting techniques, where you manipulate your own Emotions, and the Voice follows naturally. That is what really good film actors do, and that’s why they are so believable. This is also why soap-opera actors
are so PHONY. Its their voice that is not in the correct, realistic emotional place.

For people with a trained media/politics broadcast voice, its more difficult, as their voice is quite homogenized. Those guys are ALWAYS lying !   🙂

But for the average chic/salesman, whoever, i can usually tell what they are doing by the tone of their voice. You will see, some chicks voice will “harden” very slightly when they  lie, or perhaps it will soften. Or some guys voices get very “businesslike” when they lie to you.

Just for fun, go and listen to some strippers VOICE TONES for a while. You can tell a lot about them, by the tone of their voice. Their voice usually does NOT match their body !

Some chicks ALWAYS talk in a breathy tone of voice, as everything they say is FAKE ! They are ALWAYS trying to “please people” so they talk in a breathy, girly voice, cut off from their actual genuine feelings. When they hit REAL emotions, their voice drops about 4
notes !

But beware, there are some trained people, and some pathological liars, who can even have their voice match what they do. But they are very rare.

You can train yourself to HEAR very subtle involuntary emotions in peoples voices.