How Do I Approach Women 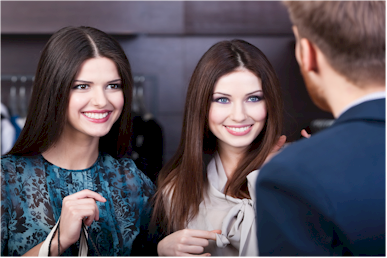 Let’s be honest, approaching women isn’t easy. It can be awkward, embarrassing, and downright difficult. But, like most things in life, if you know what you are doing it’s easier and with a little practice you can get pretty dang good at it.

When approaching women you should concentrate on three things:

All else is optional. I’m assuming that the whole reason you are approaching this girl is to get her number so that you can pursue her further. Let’s take a closer look:

Setting her at ease…

Why is this important ? Women get approached more than you think by weirdos and perverts. For this reason, women automatically put up their defenses when a guy approaches them. They become more critical and irritable. How do you get her to drop these defenses? Be friendly, smile, and keep the mood light. If you are nervous, she is going to know that you are trying to pick her up.

Also, don’t try to “pick her up.” Most likely she thinks that is the only reason you are talking to her so don’t act like you are trying to pick her up. Just carry on a conversation, chat, make jokes, heck, don’t be afraid to disagree with her, tease her… anything goes. Treat her like you would anybody else and she will notice and drop her barriers.

Obviously, if a girl is going to get her interest up. When you ask a girl for her phone number she is thinking “Do I really want this guy calling my house?” Basically, she decides how much she likes you. The guys that don’t impress her get rejected the one’s she is interested in get the number.

How do you impress women ?

Well, it sounds strange but the best thing you can do is let her talk about herself. Keep the conversation focused on her as much as possible. Letting her take control of the conversation ensures she won’t get bored, let’s you learn more about her, and keeps you from saying something stupid. You can’t lose!

Do NOT make the mistake of talking about yourself in an effort to increase her interest. It does NOT work that way.

Also, don’t drag the conversation out any longer than necessary. Get her interest up and then get out of there…

Getting the phone number…

Ahh, the moment of truth. Inevitably it will come time to part ways and when it does give her the ‘ol “Can I get your phone number?” (or some variation thereof). DO IT!!! Don’t chicken out.

Don’t be frustrated because you approached 5 girls and none of them gave you their number. I have coached hundreds of men on how to be successful with women. On average, most guys will get rejected 4 out of 5 times. But, that means that if you approach 25 women a week you will get 5 numbers. Don’t get frustrated.

Now, you are thinking “This is all fine and dandy but how do I start a conversation? That’s the hard part.” Well, there is no magic bullet I’m afraid. With practice it will become easier but I won’t leave you with nothing.

Here’s an opening line that works very well for me

“Why do you look so sad ?” or “Why do you look so happy ?” (depends on how she looks of course). Say it with confidence, with a big smile on your face and it will work well. Give it a try … you’ll be pleasantly surprised at how well it works.

This works well for two reasons

To obtain more effective openers that you could make use when approaching women, click here to “copy” exactly what a world class seduction coach is using right now …