How To Approach Women In Bars 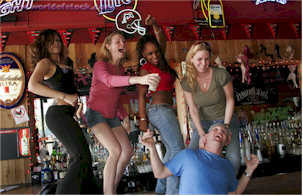 Every weekend, millions of men around the world, from Boston to Beijing, slap on their best cologne and head to the bars in the hopes of meeting women. Sure, they might act like they’re just “going out for a beer with the boys,” but many of them are secretly hoping to get lucky tonight with a member of the opposite sex.

And right there lies their first mistake: thinking of seduction in terms of “getting lucky.” Most guys really believe that hooking up with a girl at a bar is about luck, fate, or being in the right place at the right time.

They fail to understand that when it comes to how to approach women in bars, there are certain “classic mistakes” that men make all the time — ruining their chances without even realizing it — and that there are certain STRATEGIES you can use to practically guarantee success.

For one guy, “success” might mean meeting a cool girl and going home with a phone number. For guys who’ve mastered the “game” of pickup, success is defined differently. Ask them about how to approach women in bars, and they’ll say that anything short of a “same night lay” — getting a hot girl home with them TONIGHT — is a wasted evening.

Think about it. What runs through your head when see a girl at a bar that you would LOVE to talk to? You might be thinking…

“A girl THAT good-looking must already have a boyfriend.”
“I’m probably not her type.”
“She doesn’t look like she’s in the mood to be approached.”

Or, the classic male excuse…

“I want to approach her, but I have no idea what to say!”

What’s happening here is that you are only imagining the possible NEGATIVE outcomes. This is because you’ve conditioned yourself to believe that the most likely outcome, when you approach women in bars, is that women won’t want to talk to you.

For guys who don’t know how to approach women in bars, this often IS the outcome. And after going through this routine dozens, perhaps hundreds of times, these guys stop approaching women in bars altogether.

They figure, “why bother? She’s only going to respond the way the last 37 women did. She won’t be interested for whatever reason, and then I’ll have to suffer the embarrassment of walking away with my tail between my legs.”

I’m here to tell you that you can learn how to approach women in bars in a way that is fun, playful, confident and most of all STRATEGIC. There are some very cool, specific “openers” you can use with women that will make them smile, and engage their interest.

We’ve tested them out in the field THOUSANDS of times, to make sure these are the very BEST ways to “break the ice” and start an interaction.

Girls WON’T see you as some awkward, insecure guy who is hoping to NOT get rejected. Instead, women will immediately sense that you’re a guy who can add MORE FUN to their evening.